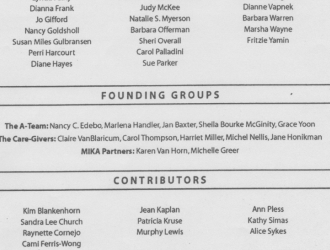 Jane helped initiate the concept of giving groups, as a way to give more women a chance to be part of the organization. By pooling their resources, women whose budgets didn’t allow them to sign up as individual members could still join. Caregivers is the only one of the original three groups that is still active with some of the original members: Jane, Claire VanBlaricum and Carol Thompson.  Former Mayor Harriet Miller and Michel Nellis were part of the original five, and civic activists Jean Sklyer and Hame Sonquist joined them the next year.

In the early days, Jane was also a member of the research committee. “Our committee would call up various local nonprofits anonymously to ask if there was an important project that needed funding. It didn’t take too long before word got out that the Women’s Fund was looking for projects to support,” she remembers. That novel approach of doing our own research, rather than accepting grant applications, still exists to this day.

What does Jane credit for the longevity of her group? “Emphasizing the simplicity and effectiveness of the Fund’s approach was all that it took – that and one meeting with my group sharing my homemade cookies,” she says. Caregivers is an open group and welcomes new members. According to Jane, “The best aspect of being part of the Women’s Fund is knowing I am making a positive financial impact in our community. I’m pleased that the we continue to grow, and younger members are joining.”