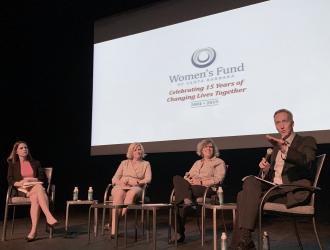 It’s been proven: Adverse Childhood Experiences (ACEs) can lead to serious health problems and shortened lives.
On October 29, Women’s Fund members and guests gathered at the New Vic Theater to hear a riveting forum about a ground-breaking ACE study. We also heard how a collaboration between Women’s Fund grantees CALM, SB Neighborhood Clinics (SBNC) and Isla Vista Youth Projects (IVYP) is creating a childhood safety net for ACEs victims and their families.

Each type of ACE trauma counts as one. So a person who's been physically abused, with one alcoholic parent and a mother who was beaten up has an ACE score of three. According to the ACE study, the rougher your childhood, the higher your score is likely to be and the higher your risk for later health problems.

Alana Walczak, CEO, CALM, took us through the study’s history. In the mid-90s, the Centers for Disease Control and Kaiser Permanente studied the lifespan of 17,500 participants (mostly white, mostly middle-class) to examine the links between childhood stressors and later adult health and well-being. Nearly two out of three adults had at least one ACE. Those with four or more ACEs increased their risk of death from Alzheimer’s disease by 11 percent and their risk of suicide by 30 percent. Four ACEs also doubled their risk of dying from cancer, heart disease and stroke, and tripled their risk of dying from a lower-digestive tract disease. Those with six ACEs or more had a 20-year decrease in life expectancy.

Yet adversity is not destiny, Walczak explained. Appropriate self-care, such as sleep, proper nutrition, exercise, counseling and financial stability can go a long way toward alleviating the consequences of toxic stress.

Positive, early intervention is the key to fighting ACE issues and creating resilience in children. The Santa Barbara Resiliency Project trains teachers, trusted health-care providers, counselors and therapists to become Wellness Navigators. They learn to spot the signs that something may be amiss in a child’s life. They gently intervene to support the child and educate the parents, then continue to track developmental, social and emotional outcomes.

Lori Lander Goodman, Executive Director, IVYP, explained that without ACES education, teachers may unintentionally aggravate a child’s predicament. What might seem a normal response to a kid acting out can actually trigger that child’s worst fears. An ACES-educated educator can address the situation properly.

In Santa Barbara, care extends to even the youngest among us. The Pediatric Resiliency Collaborative is the brainchild of Dr. Andria Barnes Ruth, Pediatrician, SBNC, in collaboration with CALM and UCSB. Its goal is to test for ACEs at well-child check-ups and support family resilience by providing trauma-informed prenatal, perinatal and pediatric care to children as young as three months.

Together, CALM, IVYP and SBNC are working miracles to improve the lives of Santa Barbara’s babies, children, teens and their families. It is an exciting concept and an impressive collaboration.

The ACES forum was part of the Women’s Fund Grants in Action series this fall, which enabled members and guests to learn more about the issues addressed by the Women’s Fund grants made in the spring.