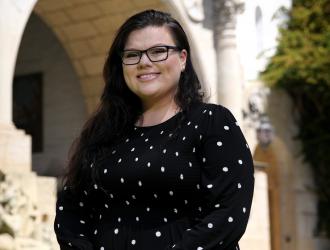 While at UC Santa Cruz, where she obtained her B.A. in Politics and Latin American/Latino Studies, Vega spent her junior year studying abroad in Spain. She witnessed first-hand the immigration issues she thought were uniquely American. They reminded her of her mother’s frustration with an immigration attorney who spoke no Spanish and revived her interest in immigration law.

Upon returning to the states she enrolled in the University of Idaho Law School, and in 2017 graduated with a degree in Immigration Law. She interned for immigration lawyers in Boston and worked as a staff attorney for the Northwest Justice Project until a fateful trip home revealed a new and exciting opportunity.

While visiting family in Santa Maria she learned of the opportunity at the Immigrant Legal Defense Center (ILDC) and “jumped at the chance to return home.”

Under the continuing leadership of Julissa Peña, the ILDC provides pro bono legal representation in deportation proceedings and civil rights education from their Santa Maria and Santa Barbara offices. “We are doing work that no other nonprofit in Santa Barbara County is doing,” Vega said.

Thanks to a $65,000 award from the Women’s Fund of Santa Barbara, Vega will be joining a team of volunteer attorneys and case workers at the ILDC. Her presence will hopefully expedite the backlog of 11 current cases and shorten the waiting list of over 100.

One of Vega’s most pressing concerns is the distrust of the judicial system that immigrants had learned. The harm made it impossible to give “families the stability they seek in the United States when fleeing violence and instability in their home countries,” Vega said. “We will continue fighting and showing up for our immigrant communities, especially this upcoming November.”