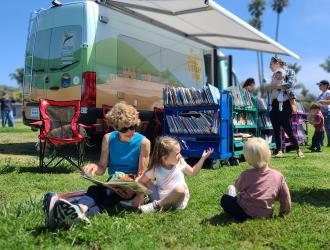 Santa Barbara Library Services Manager Molly Wetta watches patrons walk up to the doors Sunday and Monday, unaware that the central and eastside branches are closed, and press their faces to the glass, disappointed.

Santa Barbara library staff were faced with a tough decision this spring as they budgeted for the 2022 fiscal year: Cut hours or cut programming?

The city of Santa Barbara, impacted by the pandemic’s constraints, couldn’t offer departments the funding they received in pre-pandemic years. City officials asked them to cut back proposed budgets to allot for the decreased revenue.

The libraries faced additional expenses when reopening the buildings at the start of June, such as new furniture for social distancing. Around 50 to 100 paper masks have been handed out each day.

And staff don’t want to delay pre-existing goals, such as renovating the plaza outside the Central Library.

Private funding then becomes essential in the library system’s pursuit of cutting-edge, accessible programs and upgrades.

In June, a state-of-the-art mobile library was driven around the city to deliver books, provide internet access and more to community members.

“We’re able to meet people who otherwise wouldn’t be able to visit the library by bringing the books to them,” Ms. Wetta told the News-Press.

The “Library on the Go” van was launched with a Women’s Fund of Santa Barbara grant and backed by additional private donations.

“It’s always been up to the community to step up and help fund our community’s library programs, but it’s also the city’s job to properly fund the operation costs of our libraries,” Santa Barbara Public Library Foundation Director Lauren Trujillo said.

The Foundation focuses on large capital campaigns whereas the Friends of the Library funds programming and collections with an annual contribution of $65,000 or more.

Friends of the Library funds provide a free book to each child in the summer reading program.

It has raised more than $4.1 million so far of the $5 million needed. The city of Santa Barbara contributed more than $1.6 million to the project.

“I really think (the plaza) is the light at the end of the tunnel for this pandemic. This will be an outdoor space connecting the library to State Street and downtown, really gathering people for free,” Ms. Trujillo said.

Friends of the Library is hoping to expand its reach, allowing businesses to donate and claim a spot on the website.

She points to Goleta’s special library tax, which is collected when landowners pay property taxes.

It was harder for her to find fundraising opportunities this past year. Friends of the Library gathered poets and writers to tell their stories and sold tickets to watch a video of the writers’ works.

Ms. Trujillo, who contacts large donors, has been able to point to the libraries’ success during the pandemic.

“The library never stopped serving the community during the pandemic,” she said. “Our library was at the forefront of innovative ways to reach the community.”

The pandemic emphasized the importance of the library, she said.

The Foundation and the Friends are in constant communication with each other as well as the library system.

“We’re all working to improve the library, and I think everyone’s doing that really well,” Ms. Cronin Hershberg said.

She is proud of the libraries’ works, a sentiment also expressed by Ms. Trujillo.

The Central and Eastside libraries are currently open 10 a.m. to 5 p.m. Tuesday, Wednesday, Friday and Saturday as well as 10 a.m. to 6 p.m. Thursday.

To learn more about the Santa Barbara Library, go to santabarbaraca.gov/gov/depts/lib/default.asp.

The Santa Barbara Public Library Foundation is online at sblibraryfoundation.org, and Santa Barbara Friends of the Library is available at friends-sblibrary.org.